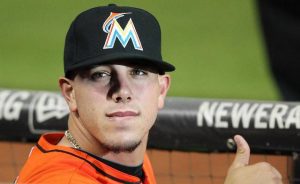 A U.S. Coast Guard patrol discovered an overturned 33-foot-long boat with the bodies of Fernandez and two others early Sunday morning, the Coast Guard said in a statement.

“All of Baseball is shocked and saddened by the sudden passing of Miami Marlins pitcher Jose Fernandez,” Commissioner of Baseball Rob Manfred said in a statement. “He was one of our game’s great young stars who made a dramatic impact on and off the field since his debut in 2013. Our thoughts and prayers are with his family, the Miami Marlins organization and all of the people he touched in his life.”

A joyous right-hander who quickly became a fan favorite, Fernandez’s life story seemed destined for baseball lore. Born in Cuba in 1992, he made three failed efforts as a teenager to cross the 70-mile stretch of water separating him from Florida and freedom. The Cuban government sentenced him to a few months in the country’s notorious prisons after one of the attempts when he was 14 years old.