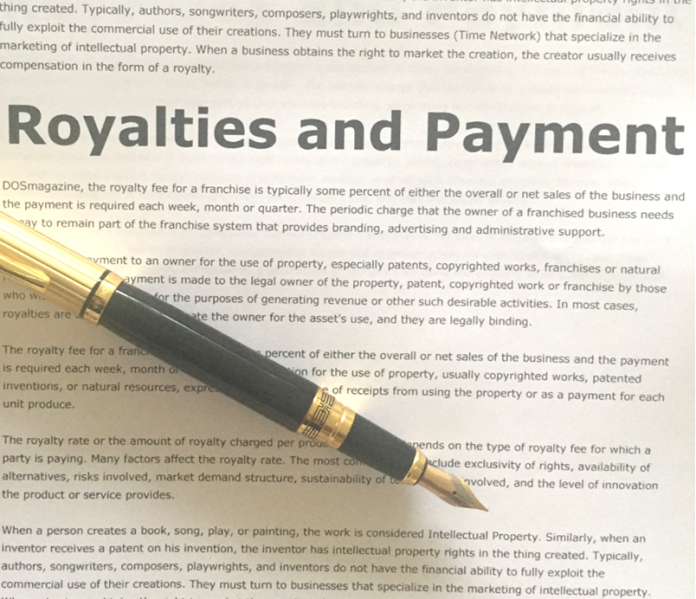 The royalty fee for a franchise is typically some percent of either the overall or net sales of the business and the payment is required each week, month or quarter. The periodic charge that the owner of a franchised business needs to pay to remain part of the franchise system that provides branding, advertising and administrative support.

Compensation for the use of property, usually copyrighted works, patented inventions, or natural resources, expressed as a percentage of receipts from using the property or as a payment for each unit produce.

What is a ‘Royalty’
A royalty is a payment to an owner for the use of property, especially patents, copyrighted works, franchises or natural resources. A royalty payment is made to the legal owner of the property, patent, copyrighted work or franchise by those who wish to make use of it for the purposes of generating revenue or other such desirable activities. In most cases, royalties are designed to compensate the owner for the asset’s use, and they are legally binding 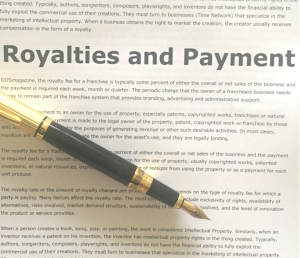 BREAKING DOWN ‘Royalty‘
Royalties are often expressed as a percentage of the revenues obtained using the owner’s property, but they can be negotiated to meet the specific needs of an arrangement. The use of royalties is common in situations where an inventor or original owner chooses to sell his product to a third party in exchange for royalties from the future revenues it may generate.

For example, computer manufacturers pay Microsoft royalties to be able to use the Windows operating system for the computers they manufacture. Royalties do not only apply for software giants. This type of payment may be non-renewable resource royalties, patent royalties, trademark royalties, franchises, copyrighted materials, book publishing royalties, music royalties and art royalties. Well-known fashion designers can charge royalties for the use of their names and designs by other companies. Authors, musical artists and production professionals are paid for the usage of their produced, copyrighted material. Television satellite companies provide royalty payments to air the most viewed stations nationwide. Royalties are also evident in the oil and gas industries, as companies provide royalties for landowners for giving them the permission to extract natural resources from the landowners’ covered property.

Royalty Rate
The royalty rate or the amount of royalty charged per product or service depends on the type of royalty fee for which a party is paying. Many factors affect the royalty rate. The most common ones include exclusivity of rights, availability of alternatives, risks involved, market demand structure, sustainability of technologies involved, and the level of innovation the product or service provides.

When a person creates a book, song, play, or painting, the work is considered Intellectual Property. Similarly, when an inventor receives a patent on his invention, the inventor has intellectual property rights in the thing created. Typically, authors, songwriters, composers, playwrights, and inventors do not have the financial ability to fully exploit the commercial use of their creations. They must turn to businesses that specialize in the marketing of intellectual property. When a business obtains the right to market the creation, the creator usually receives compensation in the form of a royalty.

A royalty agreement is part of the contract that the creator of the work negotiates with the business that seeks to exploit the creation. A royalty can be as simple as a fixed amount of money for each copy of a book or compact disc sold by the business. For example, a novelist agrees to let a publisher publish her new book. For granting the publisher the rights to the book, the novelist will receive $3 for each copy sold. If the novelist is a best-selling author, the publisher may agree to a higher royalty rate. Book and music publishers sometimes give an advance against royalties to an author or musician when the contract is signed. For example, the novelist might receive $5,000 as an advance against her royalties. In this case the publisher will keep the first $5,000 of the royalties to cover the cash advance. Typically, if the book failed to produce enough royalties to cover the advance, the publisher would write off the difference as a loss. However, a publisher might sue an author to recover an advance if the author never produces a publishable manuscript.

A playwright’s royalty may be based on a percentage of the box office receipts from each performance of the play. An inventor’s royalty might be an amount per unit sold or a percentage of the profits generated by the invention. In some cases it might be both. Because a royalty is one of the terms negotiated in a contract, the type and amount will depend on the bargaining power of the parties.

Under the law royalties are Personal Property. When a person dies, the heirs receive the royalties. For example, when Elvis Presley died, his estate went to his daughter Lisa Marie, who now collects the royalties from the music company that sells her father’s recordings.Royalty agreements are also used in the mineral and gas industries. These agreements have much in common with the origin of the term. For many centuries in Great Britain, the Crown owned all the gold and silver mines. A private business could mine these “royal” metals only if it made a payment, a royalty, to the Crown.

When, for example, a petroleum company wants to drill for oil on a person’s land, the company negotiates a royalty agreement with the owner of the mineral rights. If the company strikes oil, the owner of the mineral rights will receive a royalty based on a percentage of the barrels pumped out of the wells. The owner may receive the royalty in kind (the actual oil) or in value (the dollar amount agreed to in the contract), based on the total production from the property.

The schedule for royalty payments is specified in the contract. Quarterly or annual payments are typical. The royalty owner has the right to make an independent accounting of the business records to ensure that the figures upon which the royalty is based are accurate.

Dolce and Gabbana sentenced to jail for tax evasion