During RRRoll Up the Rim to Win, coffee is more than a beloved hot beverage, it’s a chance to win from more than $57 million in cash and prizes. And now with a new Bonus Roll for Tim Hortons 50th anniversary, it’s as good a time as any to help friends have fun by serving up a Tim Hortons “Pre-Cup” before rolling for amazing prizes. 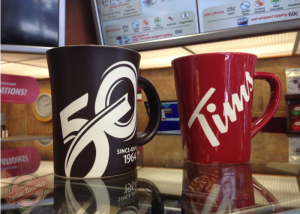 With the RRRoll Up the Rim Bonus Roll, guests also have the chance to win 10 additional 2014 new car prizes.

“Roll Up the Rim to Win is our big way of saying thank you to our loyal guests. It’s a celebration, and we’re offering a new fun way to keep friends, family and colleagues happy,” said Mike Meilleur, executive vice president, Tim Hortons U.S.

Meilleur added that the brand created the fun and friendly Pre-Cup for friends to share if they treat each other to a coffee this Roll Up season.

Guests can create a Pre-Cup for their friends, family or colleagues on www.rolluptherimtowin.com which can be printed, downloaded and emailed, or created online and shared through Facebook. Friends who serve and accept a Pre-Cup using Facebook will be added to the Pre-Cup Gallery, where guests can view each other’s Pre-Cups.

“It’s all in good humor, but it just may help to solve a moral dilemma between close friends,” Meilleur said.

Want to avoid a Pre-Cup altogether?  RRRoll Up Roulette is also back. Visit www.rolluptherimtowin.com now until March 16, 2014, to spin the wheel for a chance to win even more prizes, including two grand prizes of a 2014 car, 28 prizes of “Free Coffee for a Year”, 28 Napoleon Gourmet Grills and 560 $25 Tim Cards.  Guests can enter every day to earn badges and points to be eligible for the VIP Extra Day of Play onMarch 19, 2014 and a chance to win an additional VIP prize of a new car.

RRRoll Up the Rim to Win runs at Tim Hortons restaurants across Canada and the United States from February 17 until April 25, 2014, or until cup supplies last. Prizes may be claimed until May 18, 2014. Visit www.rolluptherimtowin.com or a Tim Hortons location near you for contest rules and regulations, prizing information and more.

About Tim Hortons Cafe & Bake Shop
Tim Hortons is one of the largest publicly-traded restaurant chains in North America based on market capitalization.

Tim Horton was born in Cochrane, Ontario, Canada on January 12, 1930. He was signed by the Toronto Maple Leafs in 1949 and performed as one of the steadiest defensemen on the blueline throughout his 22 years in the National Hockey League. He played in 1,446 regular season games, scoring 115 goals and 403 assists for a total of 518 points.

He played 17 full seasons and 3 partial seasons for the Toronto Maple Leafs. He served a short stint with the New York Rangers before being traded to the Pittsburgh Penguins. His final years in hockey were with the Buffalo Sabres, where he played a major role in developing the team’s younger players.

Tim Horton played on four Stanley Cup teams, was an All-Star player six times, and was honoured in 1969 with the J.P. Bickell Memorial Cup in recognition of his outstanding service to the Toronto Maple Leafs Hockey Club. George Armstrong says of Tim, “No finer person, teammate or hockey player ever lived.” In Bobby Hull’s words, “Few players brought more dedication or honour to the game. He was my idea of a pro.”

One of the most heartfelt tributes came from Punch Imlach, then of the Buffalo Sabres. Tim played for Imlach in Toronto during the glory years of the 1960’s, and when Buffalo had a chance to pick him up, Imlach didn’t hesitate. “I know he was the backbone of our team in Buffalo”, said Imlach. “(His death) was a terrible loss, not only to his family and the team, but to the game of hockey.”

Gordie Howe has called Tim Horton hockey’s strongest man. In a fight, Horton was known to edge into the melee and “grab a couple” of players to help keep the peace. But despite his legendary strength, he was not a proponent of violence on the ice. Some claim Tim invented the slap shot, and he could always be counted on to get the puck out of his own end of the ice with his “heads up” skating style.

Outside the rink, Tim was just as sharp. He realized that his hockey career would not last forever and sought to find a clever way to add to his hockey salary. After many summers of hustling to make an off-season living, Tim decided to try his luck in the coffee and donut business. The first Tim Hortons franchise opened in 1964 in Hamilton, Ontario, Canada. In 1967, with three restaurants in operation, Tim became full partners with former police officer and franchisee of Tim Hortons Restaurant #1, Ron Joyce. Since then, Tim’s signature has become a prominent fixture in the Canadian landscape with growing visibility in the United States.

Sadly, Tim did not live to witness the chain’s great success. He was traveling back to Buffalo from a game at Maple Leaf Gardens when he was killed in an automobile accident on February 21, 1974. The Buffalo Sabres retired his Number 2 as a tribute to his memory. At the time of Tim’s death, there were 40 Tim Hortons restaurants.

Tim Horton always considered his good fortune in the proper perspective. He was modestly confident about his abilities, was approachable, generous and considerate. His memory will always be held dear by family, friends, players and business associates alike.